The British International School of Casablanca welcomed today the British Ambassador in Morocco, Mr. Simon MARTIN, for the concretization of the partnership between BISC and the British Embassy through the Chevening scholarship programme.

The Chevening programme is an international scholarship programme funded by the British government and its partners, including the British International School of Casablanca, to support individuals with strong academic credentials and leadership potential. Chevening scholarships are designed to offer scholars the opportunity to pursue a one-year Masters degree in any field of study at an accredited university in the UK, as well as to join an influential global network of over 50,000 alumni in more than 160 countries and territories around the world. 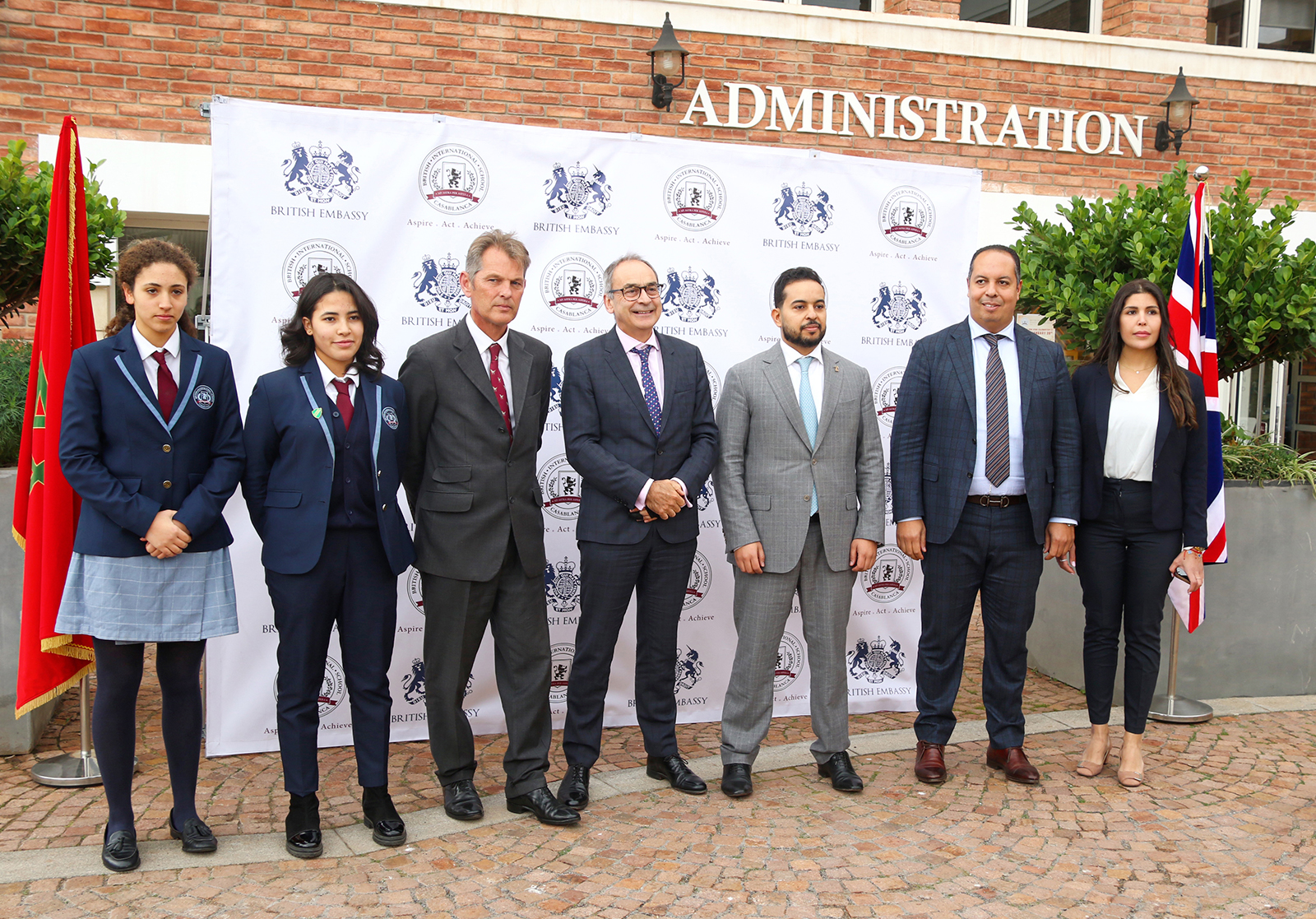 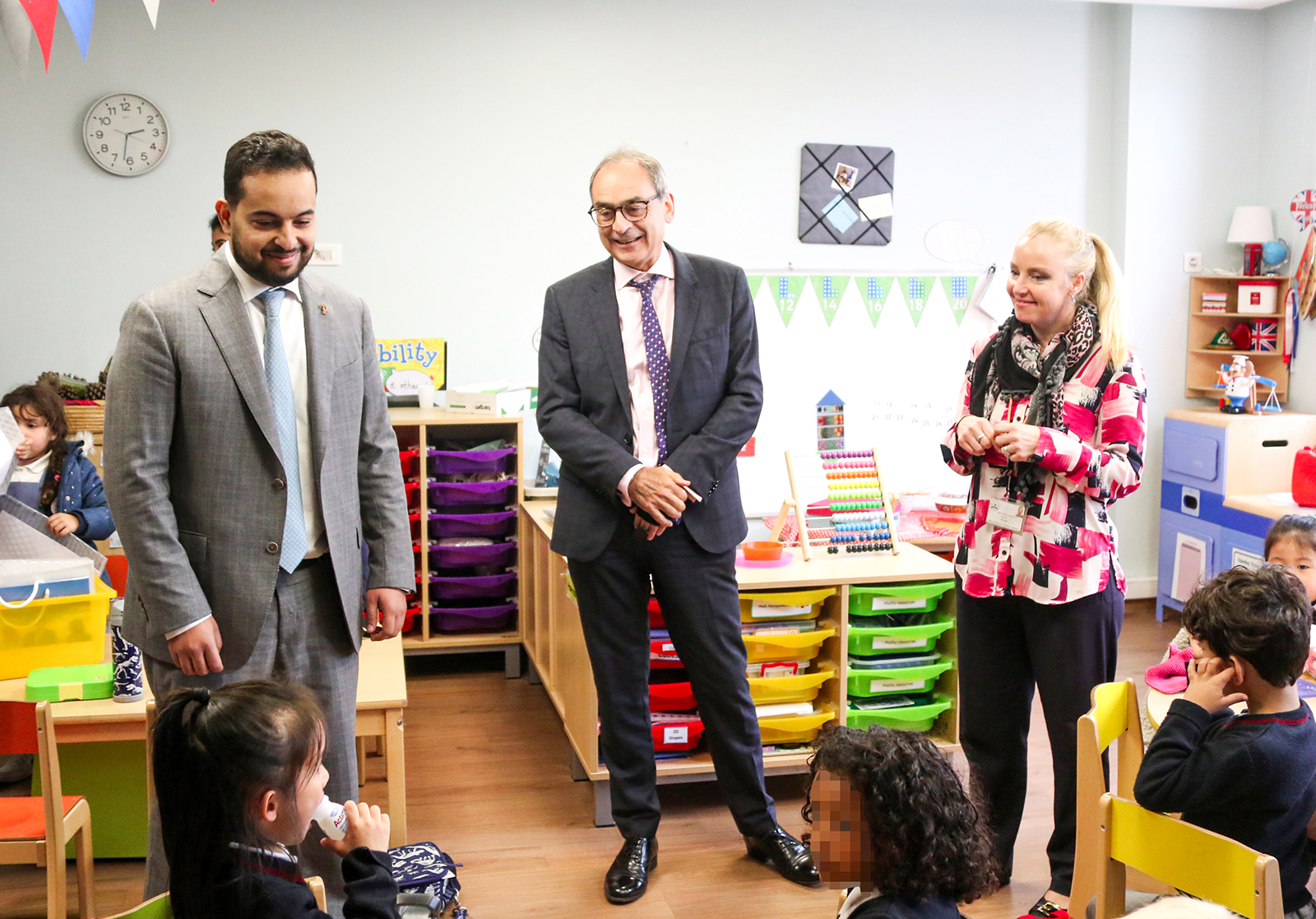 The objective of the Chevening programme is to select and support students who have the greatest potential to become leaders and decision-makers in their own countries, by providing them with a UK living and study experience that will help them develop their skills both professionally and personally. The Chevening programme is considered the most prestigious scholarship programme of its kind in the world.

Mr. Simon Martin, accompanied by the President of the British International School of Casablanca, Mr. BOUBKER EL FEHDI, visited the classrooms and the various prestigious facilities of the school, which covers an area of 5 Hectares, and which offers an education based on excellence, rigour and the fulfilment of its students.

The British Ambassador to Morocco, Mr. Simon Martin, was particularly proud of the excellent standard of the school's students, and also highlighted the cultural diversity of the school, with students coming from many different countries, with over 40 nationalities represented at BISC, and experienced teachers from a variety of backgrounds, over 95% of whom are English. 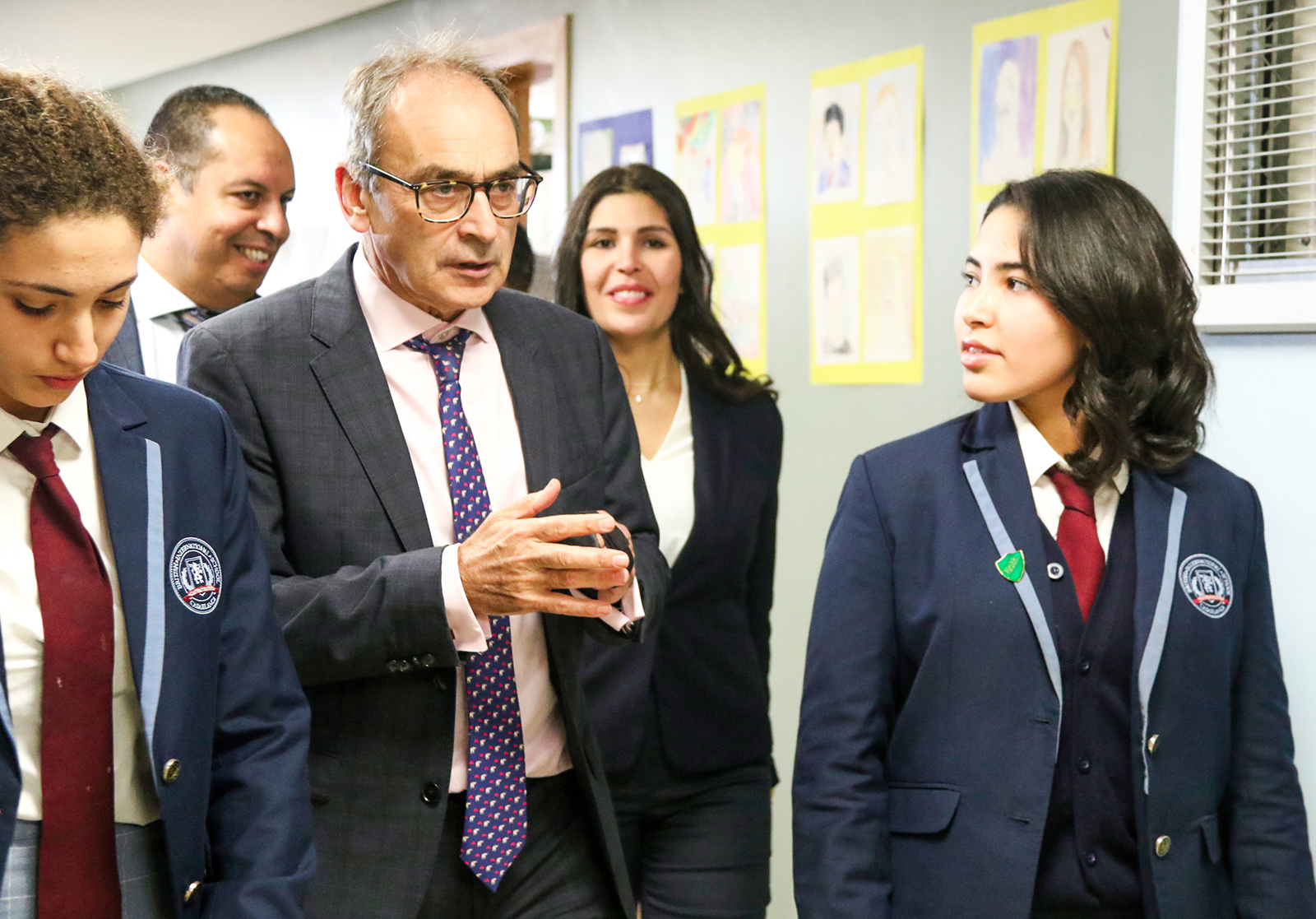 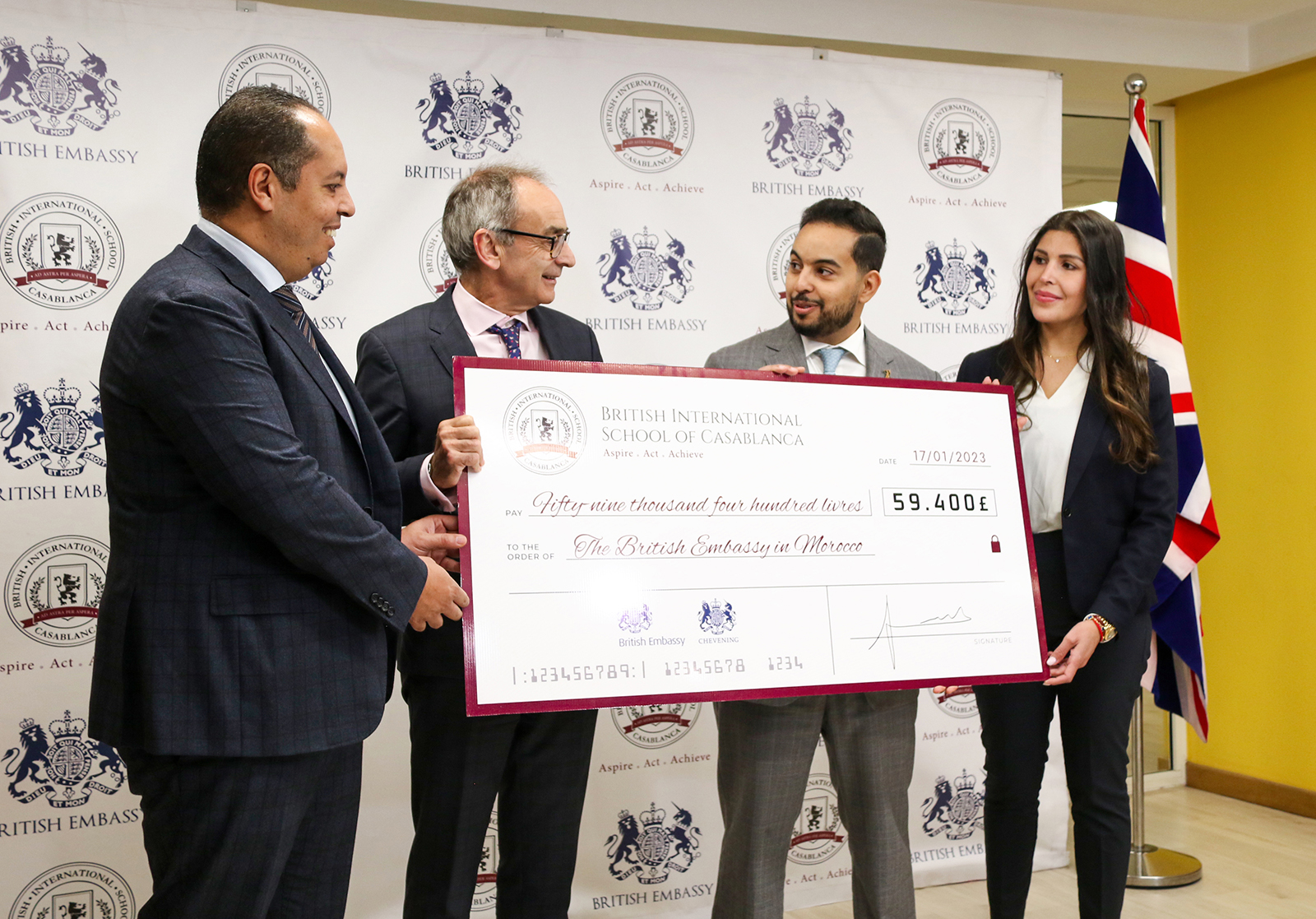 BISC is renowned for its academic excellence where students benefit from a high quality international education, with a particular emphasis on English language teaching, and an experiential pedagogy through the Cambridge Curriculum. It also offers a variety of extra-curricular programmes such as sports activities, clubs and volunteer opportunities for students to promote values such as equality, sharing and self-acceptance.

As for Mr. Boubker EL FEHDI, carrying the torch of commitment to Morocco and its youth, initiated by Mr. AHMED EL FEHDI, President of H&A INVESTMENT HOLDING, of which BISC is one of its subsidiaries, said: "The EL FEHDI family has always supported noble causes and will not hesitate at any time to make young Moroccans' image shine in the world. Through this initiative, we will allow several young Moroccans to realise their dream of studying a Master's degree at the university of their choice in the UK free of charge, thus enabling them to develop their professional and personal skills and leadership. We have also put in place a scholarship of excellence which amounts to over 3 million dirhams for the education of high achieving students from several schools in Morocco.

A cheque of 59,400 pounds, the equivalent of 750,000 Moroccan Dirhams, was delivered by Mr. Boubker EL FEHDI to the British Ambassador to Morocco, who expressed his gratitude for the commitment and dedication of the EL FEHDI family and the British International School of Casablanca.


The British International School of Casablanca was honoured to host the EdTech event organised by the British Embassy in Morocco in partnership...


Another Friday, another primary Assembly at BISC. This one is scheduled to coincide with the celebration of Halloween.


This year we invited three guests from our local BISC community to showcase and share their field of work, enterprise, or business innovation....


Throwback to the day of celebration of the prophet Mohammed’s Birthday. المولد النبوي الشريف ✨ It was a wonderful day full of activities like...


We welcomed the parents to the BISC campus. The atmosphere was happy and upbeat as parents got to know the teachers and the rest of the staff....


The British International School of Casablanca has provided a book of condolences. The entire staff, teachers, and students have taken the time...

Check out some of the best moments from the #platinumjubilee Garden party organized by The British School of Casablanca 🤩 Many thanks to our...

" Education: Which school in 2030 ? " Was the theme of the conference debate held yesterday at the "Meet the expert" organized by Chambre de...

A bonfire and fireworks to celebrate Guy Fawkes Day with our pupils!

Halloween at BISC was an exciting event our children were very creative in choosing their wonderful costumes, the event was led by the newly...

The British International School of Casablanca is promoting international mindedness and helps children become aware of cultural diversity. The...

On behalf of the British International School of Casablanca, its board members, parents, students and the management we would like to show you...

The Chinese New Year, also known as the Spring Festival or the Lunar New Year, is the festival that celebrates the beginning of a new year on...


The spirit of the holiday In BISC

The spirit of the holiday season was alive at BISC on Wednesday this week as our pupils were treated to a visit by not just one, but two Santas....


A visit from the UK Ambassador

We were delighted to welcome His Excellency Simon Martin, CMG to BISC. The Ambassador and his wife had a tour of the school, visiting several...

What a fantastic week ! Pupils completed a number of scientists experiments, they also did some fun reactions, discovered the magic of light...

The children dressed up as their favourite book characters, aren't they lovely and amazing?


Auditions for "Romeo and Juliet"

At BISC we believe in the talents of our pupils! the auditions of Romeo And Juliet has already started. Stay tuned of our amazing show


Day in The life of our School

Brushing Teeth has never been easy and so much fun. Reception were very excited to be visited by the nurse, she talked to the children about...

We enjoyed an action-packed Saturday, with three Basketball matches and a Football Match taking place and no fewer than fifty of our pupils proudly...

Our Under 10 and Under 12 Basketball teams enjoyed a busy and productive weekend. On Saturday morning coach Mustapha ran an intense extra training... 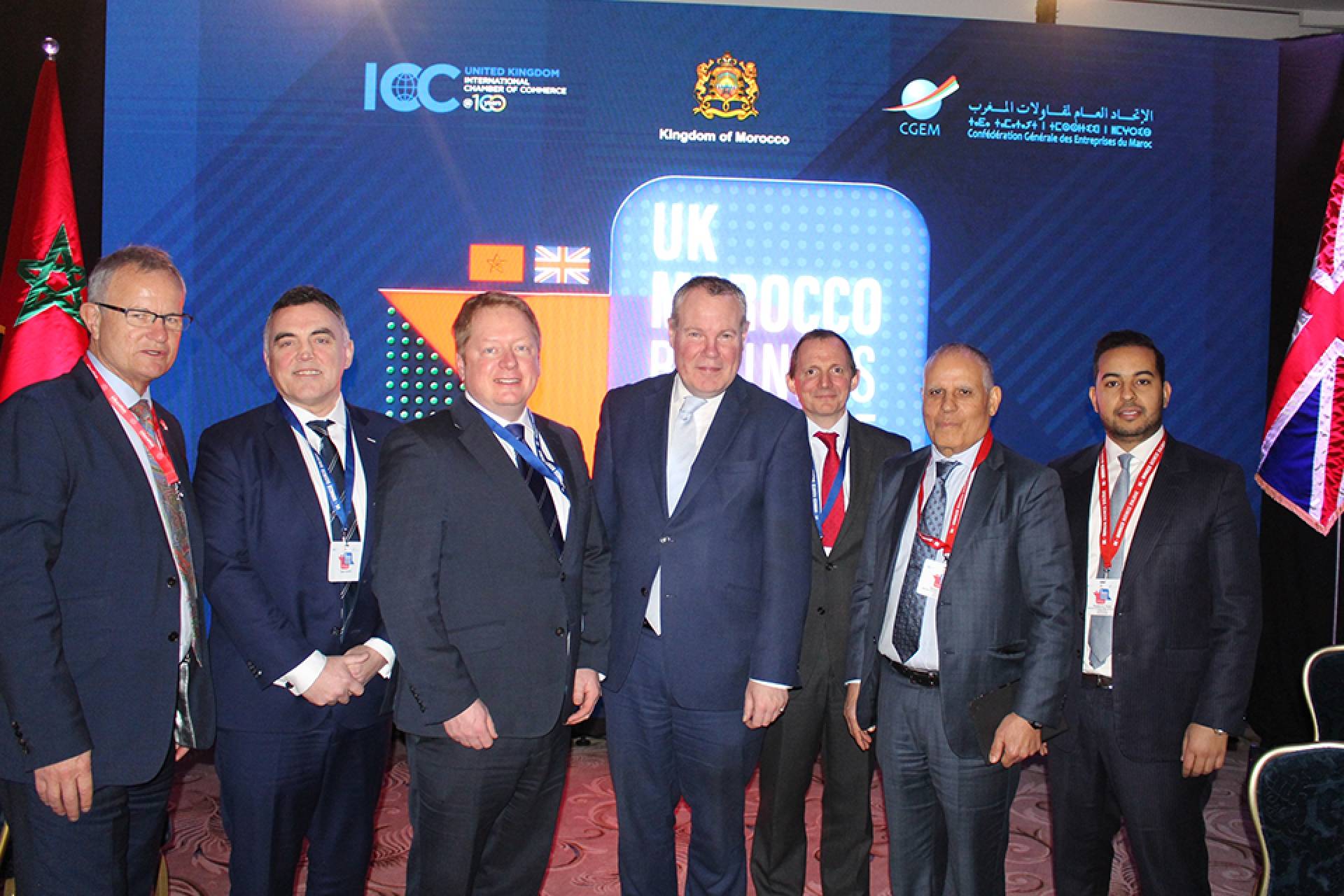 We are delighted to announce that our school has become the first international school in Morocco to go into partnership with a leading British...

The British International School of Casablanca is pleased to inform you that the WNO is performing at the Mohamed V Theatre, in Rabat, on Friday,...

Today we were delighted to welcome representatives from businesses seeking to set up operations in Casablanca. We already have four Japanese...


Role of education and vocational training

"The scientist is not a person who gives the right answers, he's one who asks the right questions." C. Levi-Strauss

At BISC we believe in encouraging all students to lead active lifestyles. They have PE and swimming lessons and opportunities to do plenty of...

Staff from our EYFS, Primary and Secondary division have been completing the accredited Teaching English as a Second Language in the Mainstream...

Inculcating a citizen responsibility mind set is of upmost importance at BISC: charity for our local community

M. Gamble Headmaster of the British international presented the cambridge Pedagogical part of a renowned curriculum worldwide in a Press Conference

Last week, your headmaster attended the Annual Conference of the Council of British International Schools (COBIS) in London. As you may know,...

On Thursday 2nd and Friday 3rd May, a group of BISC students from Y6 to Y10 put on our inaugural Shakespeare performance. The play was 'A Midsummer...

Primary and secondary pupils were welcomed during this whole week in the science lab for some practical science and Shows. This was such an...

THE BRITISH INTERNATIONAL SCHOOL OF CASABLANCA BISC organized its 1st international swimming meeting. For the first time in Moroccan history,...

During World Book Week we celebrated reading and the power of books. We had a wide range of events during the week. We had the Extreme Reading...


A Visit From Our Embassy

On Tuesday 12th March 2019, we had the pleasure of welcoming the Deputy Chief of Mission for the British Embassy, Jonathan Evans to our school.... 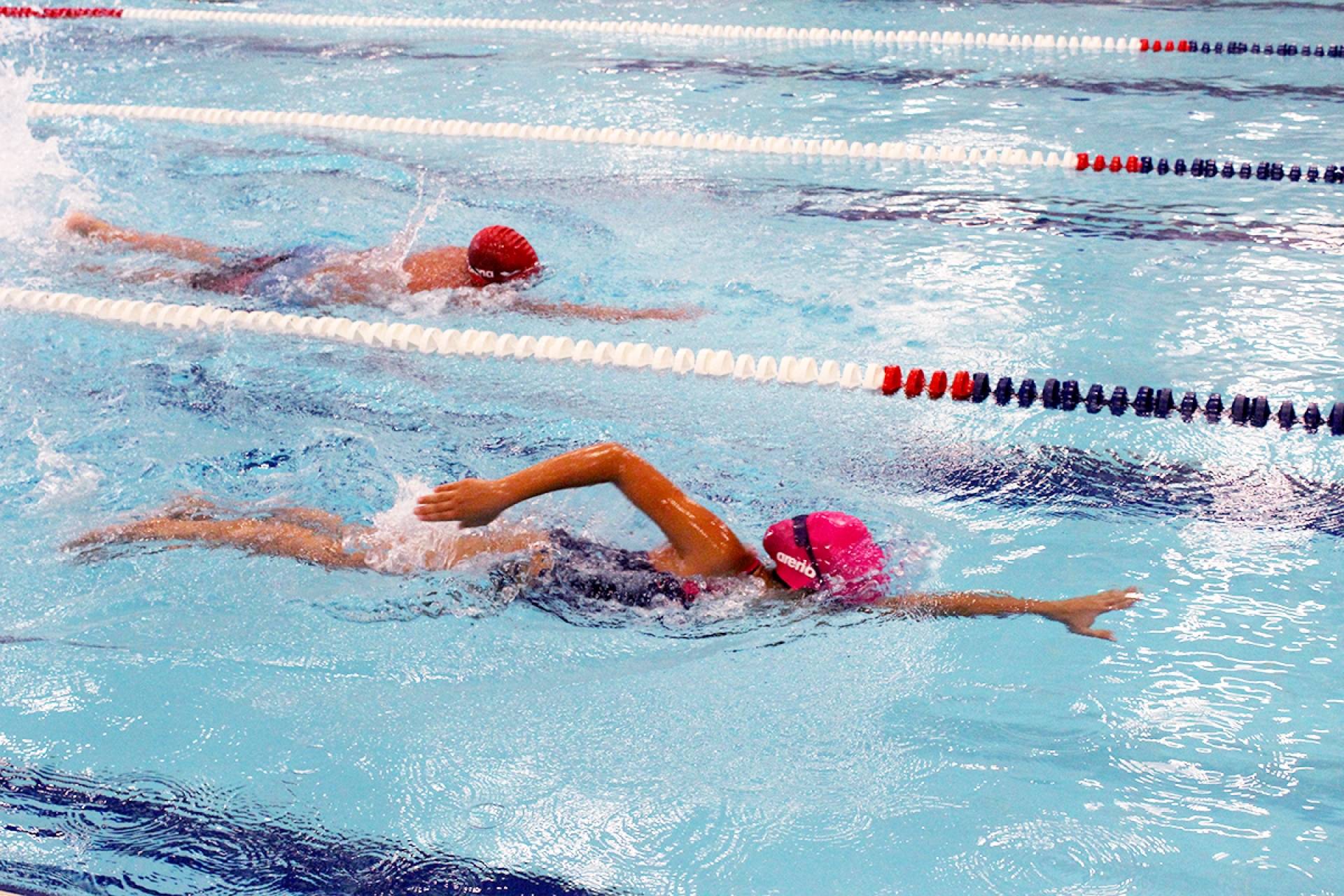 BISC organises its 1st Swimming Elite Meet. The Royal Moroccan Swimming Federation as well as more than 7 national swimming clubs will be participating...